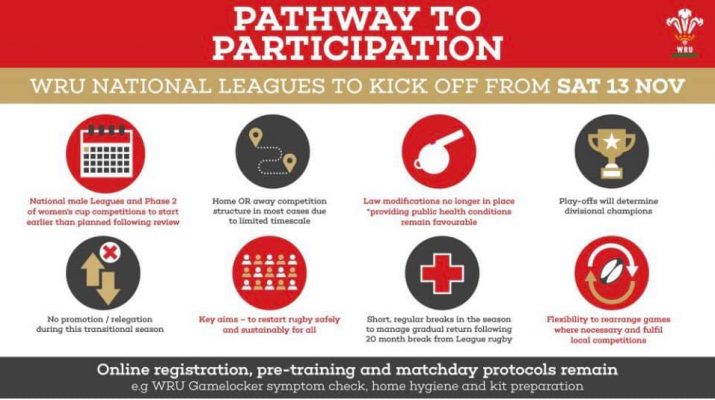 The full text of the WRU’s communication sent out today is as follows:

Wayne Pivac’s Wales team may be preparing to take on the might of the southern hemisphere this autumn but the WRU’s 300+ community clubs will also reach a milestone of their own.

The Welsh Rugby Union’s Community Game Board has made the decision to bring forward the start of the 2021/22 senior men’s League season to Saturday 13 November following a review of the rugby and public health landscape.

This will apply to all Divisions from Championship to Division Three with clubs playing each other home or away in the Divisions they were competing in at the conclusion of the National League season in March 2020. The main aims this season are to return to the full community game swiftly but as safely as possible while supporting the development of players, coaches, referees and teams and welcoming supporters back to grounds during this transitional period.

The top four teams in the Championship will be entered into play-offs to determine the champion club.

Division 1 – 3 League winners will be entered into play-offs to determine National Divisional Champions.

To be fair to all clubs in this transitional period, there will be no promotion or relegation this season.
The second phase of the senior women’s cup competitions will take place between Nov 21 and the end of January. Teams will be entered into Pools for this second phase depending on placings in the first phase which is due to complete at the end of October. There will be a break in February before the start of the women’s league programme on March 6.

The rest of the community game (youth and 2nd XV) will follow a similar seasonal structure – while it has been agreed that a long winter break is not currently necessary, regular, shorter breaks in the season have been built into nationally-organised competitions and are recommended at all levels to manage the continued gradual return to match fitness after such a long period without contact rugby. For example, the senior male Leagues include a two week Christmas break and natural breaks around international weekends.

Key points:
– The start of the senior League rugby in Wales will kick off from Sat 13 November, almost two months earlier than planned in the WRU’s Pathway to Participation following a review of the rugby and public health landscape
– The senior men’s League programme will consist of Home OR away fixtures this season as Welsh community rugby aims to complete the Pathway to Participation within a limited timescale
– The current Law modifications will no longer be in place – providing the public health conditions remain favourable
– Top four teams in Indigo Group Premiership will be entered into play-offs to determine Indigo Group champion
– Top four teams in Championship will be entered into play-offs to determine champion club
– Division 1 – 3 League winners will be entered into play-offs to determine national divisional champions
– In order to be fair and equal to all clubs there will be no promotion or relegation at any level of the National Leagues this season.
– Following 17 months without organised, competitive rugby, and a 20 month absence of League rugby, the key aims for this transitional season are to help teams and coaches to continue to restart community rugby safely; welcome players, coaches, referees, volunteers and supporters back to rugby clubs and support players to as they move to new age groups.
– Extensive medical advice has been considered in the recommendation and approval of this League format. Regular breaks in the fixture schedule have been factored in to allow for potential interruptions due to the pandemic and the need to manage the continued gradual return to match fitness of players after such a long period without contact rugby.
– This one-off League season includes an element of flexibility to allow for any further disruptions, to rearrange fixtures and schedule local competitions to support the development of players and teams, for example sevens competitions will be encouraged towards the end of the season.
– Mini and Junior rugby – organised fixtures (matrix) from September. As per senior game, regular, short breaks in the season are strongly encouraged to manage the continued gradual return to match fitness after such a long period without rugby.
– Fixtures and regulations will be published in due course (senior men, women and youth)

Financial support:
In line with the Welsh Rugby Union’s stated aim to support all its clubs to get through this period of uncertainty caused by the pandemic in a financially stable position, the Community Game Board also agreed that all clubs will receive the same Development Club Payment in Season 21/22 as received in season 20/21 plus their allocated and agreed Core Grant.

WRU Chair Rob Butcher said, “Having taken all factors into consideration and after a period of robust debate, we believe this League structure is the best option for our clubs for this transitional season.
“We are very proud of the way the volunteers within our clubs, Female Hubs and other teams have negotiated the Pathway to Participation so far and we believe this model for the League season, in addition to the cup competitions, will provide the appropriate next step towards the safe return of the full community game.”

WRU Chief Executive Steve Phillips added, “The clubs are the lifeblood of the game in Wales and while we are thrilled to return to full capacity internationals at Principality Stadium this autumn, it is vital that goes hand in hand with restarting grassroots rugby. We are committed to supporting our clubs off the field as well as on it and we hope that maintaining the same level of Core and Development payments will reassure clubs financially at a time of ongoing uncertainty.”

WRU Community Director Geraint John said, “We are pleased to be able to move a little more quickly than first planned along our Pathway to Participation and look forward to the return of regular, League rugby at all levels. Our continued aim as we have stated throughout this process, is to ensure a safe and sustainable return of the full game and make sure our clubs are as healthy as possible on and off the field when we come out of the pandemic. We feel that these measures will help clubs, volunteers and players to achieve that over the course of this season.” 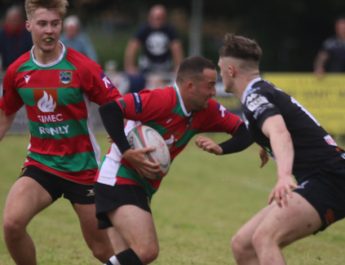 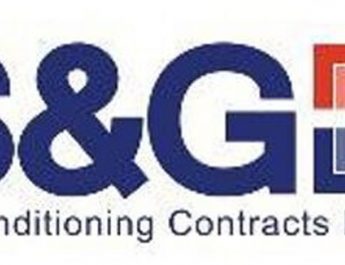 February 19, 2019 Ian Lovell Comments Off on Promoting our partners-part 2 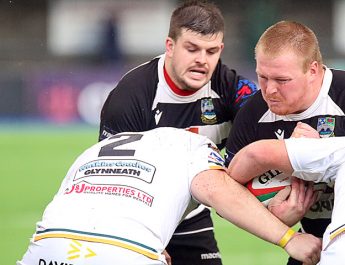